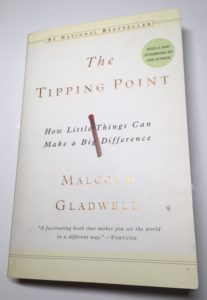 Malcolm Gladwell, author of Outliers and Blink, has also written a book called The Tipping Point: How Little Things Can Make a Big Difference. In a world where a single tweet can end your career, this concept is both interesting and stable. I thoroughly enjoy sociology and understanding the science behind how our brains work. If you ever want to create a product that is widely used or go viral, definitely a good read.

The book is pretty true to its title. We learn about products and ideas that “went viral” to put it into today’s terms. From Hush Puppies to yawns to crime in New york City, Gladwell really breaks down what happened with these things to make them ‘contagious.’ Gladwell says there are 3 rules of epidemics: the Law of the Few, the Stickiness Factor, and the Power of Context.

The illustration that most stuck out to me was the ‘Broken Windows’ theory. Crime in New York City was at an all-time high in the 1980s.Trains were always late, filthy, and layered with graffiti. Yet something happened (a tipping point) and crime dropped suddenly in the 1990s. Criminologists James Q. Wilson and George Kelling came up with the Broken Windows theory. Basically if a window is left broken and untreated, people eventually conclude that no one cares. More windows will be broken and the sense of anarchy rises. This is the perfect environment for other crimes to fester since anything goes. So what appears to be a minor issue with a broken window can lead to graffiti, mugging, and more serious crimes. The New York Transit authority hired Kelling in the mid 1980s and he helped to put the Broken Windows theory into practice. The entire fleet of Manhattan trains were cleaned up from 1984 to 1990. A clear message was sent to the graffiti artists. The other item the New York Transit team tackled was people jumping the turnstile or simply not paying. Again, it was a small issue, at $1.25 per person, but over time it added up and created an atmosphere of acceptance. TUrns out, that when they started enforcing the rules and arresting people that skipped out on fares, they found criminals with outstanding warrants. After a while, people caught on and began paying their fares and leaving their weapons at home.

There are several other case studies described in the book. When we look at Uber, Airbnb and other concepts that failed previously, it really is important to understand what was done differently to create a a tipping point. It’s the difference between Friendster, MySpace, and Facebook. We all thought MySpace was going to blow up . . .and yet, it did not. Why was that though? Why is Instagram hotter than Twitter? What is the next new thing? Will it succeed or soon go away?

I’m interested to see what happens with the new banking app, Zelle. I’ve already seen commercials for it, but it’s competing with PayPal and Venmo, which have already proven their success.

Great book, definitely worth a read!