I just got back from a trip to Portugal, and think it’s a great country to visit. Here are some travel tips and  suggestions, if you decide to go there. First, we started in Lisbon, and then went to Porto.

Do your research. I felt very well-informed on safety, places to avoid, customs, etc because I read a few articles online. I also bought a Portuguese Phrasebook and Dictionary, which was invaluable, and watched a couple YouTube videos.

Packing cube-type bags are also super helpful in your carry-on and for general neatness. Next time I will stick to a carry-on. Probably. Ok, we know I probably won’t, but I’ll attempt to try.

When you arrive, change some money into the local currency, in this case it was Euros. You don’t want to be stuck in a taxi or something just to find out they can’t take your money.

Luggage storage is the ish! If your hotel or accommodations are not ready yet, there are usually several places near train stations where you can leave your bag for a couple hours. It’s great to leave your bag (always keep your passport on you), go do a tour, pick up keys/check in, then pick up your bag before night fall. 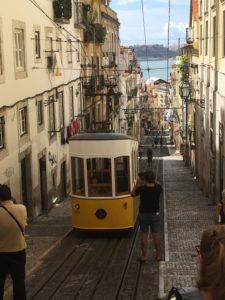 The internet pretty much scared me from using Taxi’s based on people’s negative reviews of the aggressiveness, and I’m sure they all aren’t bad, but I wasn’t trying to have a confrontation by myself in a foreign land. I decided to take the metro where I could, and Uber around otherwise. From the airport I followed signs to the metro (and double checked at the information desk). Once I got there I bought a metro card and put about 10 Euros on it, which I thought would be enough for the week or so that I was there. There were metro maps everywhere, but I had also imported a pdf of the map onto my iphone for offline use.

Now, Taxi drivers hate UBER, which is understandable. It wasn’t until Porto that we learned they would get violent and aggressive with both the Uber drivers and the passengers. So if you do decide to use Uber try not to get off/on near the taxis, to just avoid that situation altogether. I do know people that have taken Taxis with no problem, so if you want to do that, go for it, but maybe do it when you are not alone, in case there is an issue.

And as I mentioned before, the transit system is pretty simple to follow. If you’ve ever taken the subway in Philly, New York, or DC, it’s a piece of cake. Tram 28 is also popular and goes to some neat destinations. Just be careful of pickpockets, as it gets super crowded and full of tourists.

I have always been a big advocate for Sandeman’s NEW Europse – Lisbon Walking Tours ever since the first one in Munich, Germany, and I absolutely love them. 3 hours walking around the city with other tourist. You learn the lay of the land, some history, and meet some really nice people. It’s a great way to get your bearings and to note things you may want to stop back to see later. 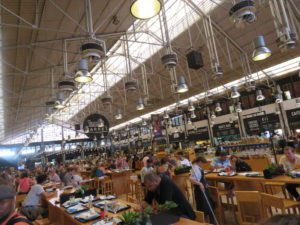 There’s a place called the Time Out Market which has everything. Grab a table and everyone can get whatever food they want. They also have music playing in the background. Everywhere you go you can get Tapas (small plates) so it’s a great way to try things. TripAdvisor is used pretty heavily there, so check it out for amazing restaurants. And if it says make a reservation, make a reservation, because they have no problem turning you away even if there are empty tables. We never felt rushed, even being there past closing, and the wait staff and owners were always very friendly.

There are tons of restaurants that are worth checking out, and it would be a shame to only list a couple, but you can’t go wrong dining in Baixa-Chiado – it’s less crowded than downtown. The closer you are to touristy things, the higher prices you will pay. I really didn’t have a bad meal. Getting things well-done is not very well understood, but other than that I think we all enjoyed our meals everywhere. The tour guides told us, don’t spend more than 1 euro on coffee, 5-7 euros on breakfast/lunch and 10-15 euros on dinner. If you do, you are being exploited a bit for being a tourist.

Alfama is no joke with its hills, stairs, and cobblestone. You will need a good pair of flats. I love to walk, but this is walking at a whole new level. I easily did 15,000+ steps a day, just getting around. I found that the souvenoirs were cheaper in Alfama (and you can always haggle) than in Baixa-Chiado or other stores. Don’t let the graffiti scare you. Where I’m from alleys and graffiti mark terrorities I don’t frequent, but here it was the norm. Once you realize that alleys in Alfama were alright, it was a cool experience. You walk by places at night, hear live music, and sit down. By the end of the night you are dancing and singing with strangers.

Sintra is an easy train ride from Lisbon. Go to Rossio (not the Metro stop,

but the main train station) and buy your tickets – it’s like 5 Euros. Takes about an hour. When you get there either do a bus or hire a tour. The ticket offices aren’t super helpful, so it’s best to look things up before you go. We took a Tuk-Tuk up the mountain (the incline is no joke). I would recommend leaving early and visitng Pena Palace, Monserrate, Regaleira Palace, and finally Roca Cape and Cascais. Depending on the season, you may not have great gardens to see. Our driver to Cascais (Rafael) agreed to take us there and make a couple of stops so we could get pictures. Definitely agree on pricing before you get in anyone’s car. He was super nice and surprisingly waited for us for like an hour in Monserrate, while we took pictures. Cascais is a bit of a drive (40 minutes) but there is a train station there that you can catch back to Lisbon. The view of the coast is spectacular (from Roca de Cabo, along the way)!!! 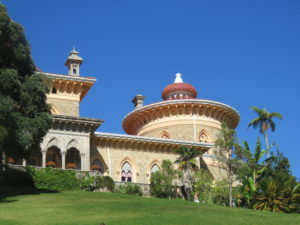 I would spend the most time at Pena Palace, because it is the hardest to get to. You can take the bus as well to get there but be prepared for long lines. You can easily spend an hour exploring the Palace. If you were to go inside another one I would recommend Regaleira Palace, as it has the cool inside swirl with 7 levels. But once you’ve see one palace they all start to look similar. You definitely want to get to Roca Cape and Cascais before the sun sets. The tour guides will most likely offer you 5 palaces and 1 castle. It’s 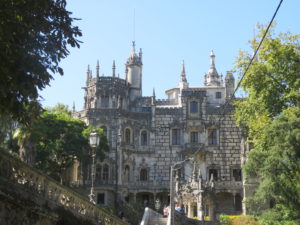 not a bad deal, but there’s no guarantee you will see everything. If you want to see everything, you need to be your own timekeeper. If the goal is to get to Cascais before dark, you typically would have until about 7pm to get there, meaning you want to leave your last palace by 6pm. We went in the afternoon and did not break for lunch, but if you want to make it an all day affair, get to Sintra super early. Take an hour for lunch, and then get a ride to Cascais and Roca Cape. Be careful of the hop on hop off bus which can eat a lot of your time. All of the drivers are pretty much charging the same price, so there’s no real “deal,” but you can agree on what you want to see and have them help you see everything. I was satisfied not seeing the inside of everything, but we had really good drivers that would point to it while we were passing or stop so that we could take pictures. Pays to be friendly. 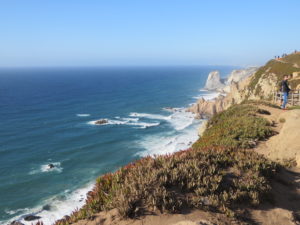 Cabo da Roca is the most western point in Europe. There’s a statue that you can take a picture with, but mainly peole go for the view. It gets super windy up there, so if you have a  jacket, this is the place to bring it. I kept a light, foldable poncho in my book bag most times (learned from that first day) and it doubled as a wind protector.

I found this website to be very helpful with information: http://lisbon-portugal-guide.com/lisbon-to-bus-train/lisbon-to-porto-train.html

You can catch the train at Oriente, or Santa Apolina station. 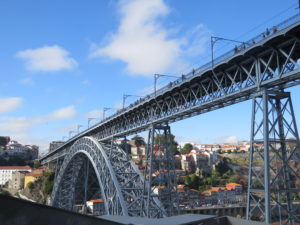 There are two different trains: The Alfa Pendular takes 2.5 hours, while the Intercity train takes 3 hours. And you have 1st and 2nd class for both. It was a quick and comfy train ride, so I definitely recommend taking the train. Europeans do not announced things 3 times, so pay attention, or you will miss your stop. In Porto, you will get off at Sao Bento station. Inside, there’s some cool tiles the locals rave about. I was under impressed, but it did look nice.

I enjoyed walking across the Pon Luis Bridge. More hills in Porto. I think the Portuguese just love their hills.

There’s always a party somewhere. Walking downtown you will find many places with their doors open, no cover, and lots of music. We spent a lot of time at W Black (or Black W) and had a good time. I don’t know how I feel about the DJ playing all of Eve’s album when we walked in, but by the end of the night we had given him some good music suggestions. We brought in tons of business for these clubs because we would always get the party started (I’m not being sarcastic) and it was a good time. We even got the whole club doing the electric slide. Now,THAT, was hilarious!

The homeless was a bit more aggressive in Porto than in Lisbon, so just be on the lookout. And be mindful of reaching into pockets, because some people worked in teams. Yelling Nao (pronounced “now”) seemed to work at making people leave. 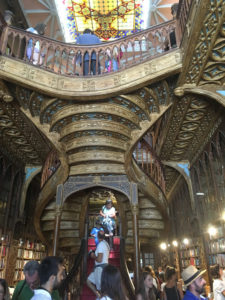 My favorite place in Porto was the Livraria Lello bookstore. It was amazing!!! The architecture was super cool and we learned that J.K. Rowling was inspired there while writing Harry Potter. It’s just so different from anything else I had seen. When you go you get a voucher, which you can use towards the purchase of a book. Before you wait in line, there’s a gift shop at the corner of the street, where you need to buy an admission voucher for 4Euros. After you get that, put any bookbags in the lockers, and get in the line for the bookstore. Since it’s a VOUCHER, you get that money towards the purchase of any books.

There’s so much to do in Portugal and it’s impossible to see it all, but there’s never a dull moment. I highly recommend visiting the country and immersing yourself in the culture. Most people were super friendly and overly accommodating. I had the most fun talking to the different Uber drivers from all over the world.

Lastly, I leave you with this picture. It is a Cork Oak tree. That’s right, cork (as in cork boards) grows on a tree. Portugal is one of the largest producers of Cork. I never really thought about cork, I just pushed pins in its and hung papers. It’s really amazing to see it grow and I’m intrigued to learn how it’s processed. In the shops they sold cork wallets, purses, bracelets, umbrella’s, you name it. One more instance of Portuguese influence that we may not have been aware. 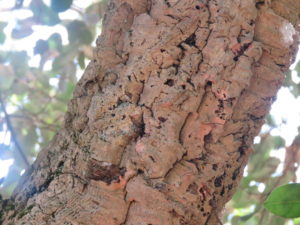 Hope you enjoyed this synopsis! If you have a country that you visited and would like to share an article, please reach out for a guest post. Safe travels!

**All pictures shown are pictures from my trip. All Rights Reserved.