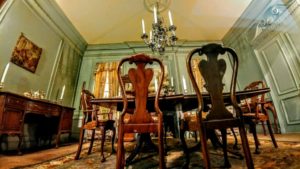 NOTE: This review may contain spoilers, but let’s be real. If you haven’t seen it, you probably aren’t going to watch it. This movie was so hard to see. It was in select theatres for like a day, and even then you could only choose between noon and midnight. I am exaggerating, of course, but you really had to be determined if you wanted to see this film.

Alright, let’s back it up – Beatriz at Dinner (2017) was written by Mike White, and Directed by Miguel Arteta. The main stars were Salma Hayek (Beatriz) and John Lithgow (Doug Strutt). After the watching the trailer, I was super excited to see this movie. You have a Mexican lady that is visiting a wealthy American in her house, at what looked like an invite for dinner. A wealthy visitor immediately clashes with the guest, making disrespectful assumptions about her citizenship and thoughts. I was prepared for amazing dialogue and presentation of both sides on screen. That’s really all I knew about the film going in. Taking the political environment into account, I thought this would be a great discussion piece.

Based on my tone of the previous paragraph, you probably can sense that I was let down. And that’s true, but the film held it’s own up until the very very horrible ending. The acting was superb, and I believe that is why I could feel so strongly for the main characters. Some characters were just “there” and didn’t really add to the plot or purpose.

Ok, so first of all, Beatriz was visiting a client’s house to give her a massage. They live very different lifestyles and Beatriz had to come from a very far distance to get there. Her client was wealthy. She was not. Her car breaks down in their driveway and she is not able to drive home after the appointment. We also had learned that Beatriz’s neighbor had it in for her pet goat, and killed him. Beatriz doesn’t have kids, lives alone, and her dog and goat were her family. She’s a healer and very holistic and into nature.

Beatriz calls her cousin to come fix the car, and we all know that will fall through. Her client, Cathy, tells her to stay for dinner before checking with her husband, who is expecting  his boss and does not want any extra people there. There was a rude exchange between the husband and wife (which was never really explored), but based on the title, you know who, stays for dinner. It is also worth mentioning that Cathy’s daughter had been very sick and Beatriz was the healer that helped her get back healthy. The husband figure rarely mentions this at all, so I have to think that the kid was from a previous man (totally unimportant to the story) or he’s just that cold.

So, it’s an uncomfortable situation. Beatriz is not dressed for a fancy dinner, but she tucks in her shirt and makes sure she looks ok. Wealthy boss guy walks in and everyone pretty much ignores her. Sure, one couple makes small talk, but she’s really unsure of where she belongs for the night. Should she follow the ladies outside and make small talk or should she stay inside and wait for dinner to be prepared? She goes for the former and eventually her presence is acknowledged. Now, this is where we start  to see the parallels of the Minority and the Majority, as I interpret it. The Minority just wants to be acknowledged and welcomed into the group. Minority and Majority can be used for race, gender, etc. In the political context I would assume race for this case, but the parallels are endless.

You have situation after situation where you see the parallels in society. Beatriz stands near the wealthy men and Boss guy assumes she is the help. What follows is the husband correcting Doug (Boss guy) and taking his glass inside to get more wine. Beatriz also asks him to fill her glass. There was a pause that was so loud, that I loved it. That pause said so much because he didn’t want to worry about her glass. She was a lower class and he should not be “fetching” anything for her. But he did it, because it would have been more awkward to make a scene. Loved that part.

Beatriz chats with the ladies and realizes they only care about shallow things happening in the world. She tries to make the conversation deep, but it backfires. Check your Facebook feeds and you will see the parallels of trivial, non-important activities posted on a hourly basis. And the deep conversations get pushed to the bottom many times. It’s not that people don’t want to discuss them, it’s just easier to talk about the weather or the latest sports game than have to get into your emotions and talk about the latest unarmed victim of a shooting. So I love this scene for exposing that.

Then you have the infamous dinner. Well, what I thought would be the infamous dinner. I honestly thought this would be like “Before Sunset” with deep conversation and just that the setting was at a dinner table. Dinner didn’t last very long. But you did have the question: if you are invited somewhere where you don’t necessarily belong, do you make yourself small and invisible, or do you speak up if something is wrong? And it’s tough. Beatriz was the guest and wasn’t even supposed to be at dinner, but how can she just sit there and not give her thoughts if everyone else is expressing theirs? When they asked her questions, you could tell they wanted the short version and they didn’t really care, but were just asking to be polite. She knew that, but would go on anyway. When Beatriz learned that Doug was in charge of demolishing neighborhoods to put up fancy hotels, it struck a nerve. Because her family had been pushed out for that same reason. She mentioned it and no one seemed to care. Or they brushed it off because it might not have been Doug and therefore not relevant to the dinner at hand.

It was very obvious that everyone at dinner was only concerned with the monetary aspect of their job. They did not have to worry about the families they were displacing. Beatriz was probably the first encounter they had with someone of that socioeconomic class that would ever have been touched, and they did not want to have to deal with it. To me, this is the film’s greatest strength, but it was not truly developed. We live in a society with tons of problems. And it is exhausting fighting them all day every day. But just because you can not solve poverty, world hunger, human trafficking, water shortage, and the myriad of problems, doesn’t mean you stop caring. It doesn’t mean that when you meet a victim of one of these injustices that you ignore them and tell them to get over it. You don’t tell the person who you have cause the injustice to, to get over it. That is what this movie should have been about, but it missed the mark.

Beatriz at dinner had so much potential to teach that lesson, but it had quirky remark over quirky remark and then the subject was changed. There was no depth. No one learned anything. We saw what we see today on television: two sides talking at each other and no one is listening. That is why I was so disappointed in the ending. Beatriz wanted to kill Doug. He was the epitome of everything she hated. He was a source of all this pain. He, in essence, killed her goat. Yet, she realized that killing him wouldn’t solve the problem. There would be his kids, and his employees, and their kids, and their employees, and it would be an endless cycle. And so, she gave up. The healer, with so much optimism, gave up. I was so disappointed in the final scene where she committed suicide. She just walked into the ocean and didn’t stop and the screen faded to black, then to the next day, and then the credits rolled. I was so thoroughly disappointed in a film that had successfully shown both sides (even if it lacked depth) and then implied that we should all give up. What? Horrible ending!

I wish the Wealthy had listened more and had learned something. I wish that the Minority hadn’t given up. I wish there was more of a discussion and less talking at each other. This movie had you rooting for Beatriz and she let you down. Perhaps Boss guy flinched and thought of his life more after Beatriz dropped the letter opener (she was going to stab him but thought against it), but the audience is left to guess and hope that anyone in that film learned anything. To me, that is a failure. 2 hours and I’m not sure anything more happened, than when the film had started.

I would give it 2 starts out of 5. It had potential, but it brought us up and left us hanging.

Posted in Learn Something and tagged Movie, Paradigm Shift, Politics.