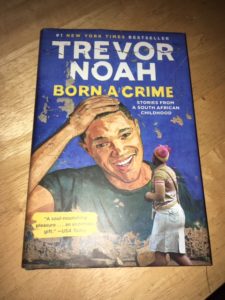 I recently read the book “Born a Crime” by Trevor Noah. I’ll be honest, with everything going on in the world, I didn’t want to read this book. I found Trevor to be very funny and was intrigued but at the end of the day I had had my share of race issues. I was tired of talking about race, listening about race, and arguing about race. I loosely knew the story involved him growing up in South Africa and apartheid, so I imagined it would be heavily laden with more burdensome stories and I was at my emotional max.

However, I saw that a friend had read it on Goodreads, and in talking to them they said it was Excellent. They also squashed my fear, and told me that it really wasn’t too heavy. So, with new excitement, I garnered up myself a copy on my kindle. In hindsight I’m sure the audio version would have been even more amazing.

This book was phenomenal. Noah took a somber true life experience and turned it into a comical reflection. I literally laughed out loud, got visibly angry, and cried throughout this book. I stayed up reading at times when I should have gone to bed because I wanted to find out what happened next.

For those that don’t know, Trevor Noah is a comedian. He took over The Daily Show when Jon Stewart left. That was actually my first experience hearing of him. He appeared to be Black with a British accent and pretty funny. I later found out that was actually a South African accent. I never watched the Daily Show until Noah was the host, and I have since watched several highlights on YouTube to hear a bit or just for an informative, worldly-news laugh.

In short, Noah’s story is simply this: he had a dark-skinned South African mother and a pale-skinned European father, so he came out light-skinned. Because of his skin tone, everyone one that he was a mixed child. Since it was illegal for Whites and Blacks to do anything together, let alone have a child, he spent a lot of his life trying to fit in, hiding the truth, and picking a side, without alienating the other side. It was a tough struggle. He talked a lot about how strong his mother was and the things she did to get around the system, to make sure that he had a good education, and all the opportunities available to him that she didn’t have.

What I also appreciated about the book is that he parallels his life to the lives of Black Americans in the United States. While the problems are dramatically different, there are a lot of parallels in terms of light skin versus dark skin, availability of opportunity, and access to resources.

One of my favorite lines in the book follows the parable of the fisherman. The saying is that if you feed a man a fish, you feed him for a day, but if you teach a man to fish, you feed him for a lifetime. But no one talks about the fishing rod. If you used your fishing rod to teach said person how to fish and then you take the rod with you when you are done, what good is that skill to them? And that’s what we do in a lot of communities. We go in, show some skill, and leave, without building an infrastructure for success.

To take it a step further, we could use this same argument with gentrification. There’s nothing wrong with beautifying a neighborhood and making it cleaner and safer, but must we ALWAYS do that at the expense of the local community? What are we communicating to them when we clean the community for OTHERS and hadn’t cleaned it for THEM? It all really boils down to money, which again is a socioeconomic issue. Refer to the review of The Tipping Point . If a window is broken in a building in a neighborhood and never fixed, it is going to look like no one cares. It will attract negative attention because no one is “paying attention” and people can get away with things in and around that building; maybe drugs, maybe graffiti. Similarly with litter. If the litter never gets picked up it becomes the norm and is unfortunately accepted. Without the tools to keep the area clean, the people who are trying to help might get frustrated and overwhelmed, and eventually may give up trying to clean up a space. Enter the government. If cleanliness can be maintained in the gentrified areas, they could have been maintained in the non-gentrified areas. And if that is not the case, we get into a very different discussion about who gets to be in a cleaner area and who doesn’t. Unfortunately, it’s probably based on property tax and money, so poorer areas, just can’t buy the fishing rod. They know how to fish, but there’s no avenue to help maintain their system.

The book touched on so many topics. I appreciated him sharing his life story and all the things that happened in his little towns in South Africa. It really gives us a more global perspective of what’s going on, and also how western-focused we are when we talk about issues. The conversation we tend to have rarely discusses the many countries of Africa.

Great book, and amazing read. I thoroughly enjoyed it.

Please post comments and thoughts below. And if you have other book suggestions, please let me know.  Next on my list is Americanah by Chimamanda Ngozi Adichie.